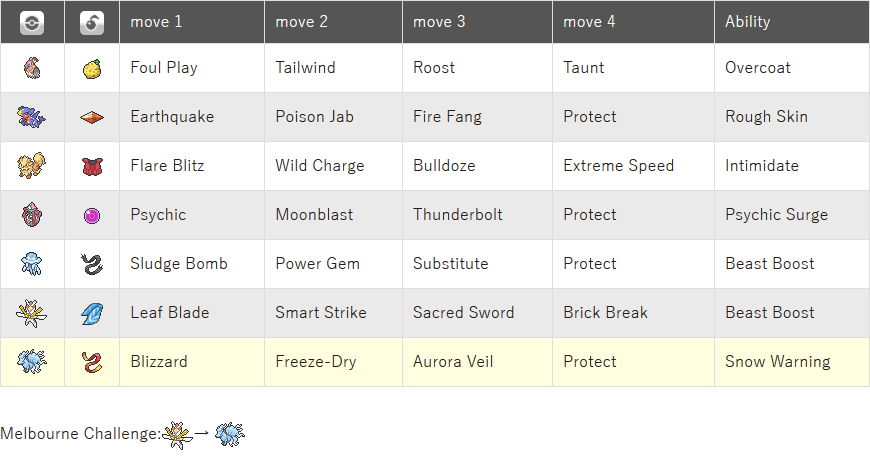 Hello my name is Junio and today I’ll be sharing my Mandibuzz Tailwind team which i used to achieve Runner-up in the 2nd Kanto Regionals and Top 8 at the Melbourne Challenge, hosted by @zeldavgc. I think part of my success comes from building this team to be strong in a BO3 situation, hopefully you can take something away after reading this report!

How I built the team

The meta game at this point of time is full of Tapu’s + Arcanine so i decided to take a look at Nihilego which can hit both of these with STAB weaknesses. I noticed that Mandibuzz + Nihilego have good synergy typing wise so I start the team with these two Pokemon.

I think that team building for vgc2017 requires you to be cautious of how weak the team is against ground type moves. Mandibuzz is a Flying type which makes a natural counter against Ground types while allowing your own Ground type to use moves such as Earthquake.

Nihilego fills some of these roles, but I figured it wasn’t enough so I looked for what else fit these roles.

With the Kanto Regionals coming up, I knew I wanted to make the team strong in a BO3 situation. In doing so, I kept in mind the following while team building:

・Giving Protect to as many of my Pokemon as possible to allow for flexible plays.
・Having ways to be immune to opposing Z moves.

In a BO3, after game 1 and finding out which of the opponent’s Pokemon uses a Z move, with ways to be immune to that Z move, you have a lot more options and pressure against the opponent in games 2 and 3.

With these aspects in mind, I started building the team. Making both “Enough power to pressure opponent during Tailwind” and not using choice items to do this to achieve max flexibility was not an easy task.

I added Garchomp since it is immune to Electric type attacks while able to use Ground type moves which usually hits a lot of opponents.

The item is Groundium Z to achieve a high power and flexibility.

With Garchomp added, the team now has ways to be immune against Gigavolt Havoc, Tectonic Rage and Shattered Psyche which limits the opponent from mindlessly using these Z moves.

With 2 fairy weaknesses, I decided the rest of the team keeping this in mind.

To achieve flexibility in playing, I needed a Pokemon with Intimidate.
Arcanine only made sense since it had good typing synergy and solid base stats.

Mandibuzz not only gets hit super effective by opposing Tapu’s, but has no way of interfering with them. Tapu Fini would come to mind as a Pokemon to neuter other Tapu’s, but since it shares a common weakness with Mandibuzz, I wanted something else.

To check the biggest threat of the Tapu’s, Tapu Koko, I decided on Tapu Lele as my 5th member. This allowed for a Arcanine + Tapu Lele lead for the team as well.

Garchomp + Arcanine centralized standard teams lack a consistent way to hit water types, and I still felt that Tapu’s were a threat to the team.

Kartana was chosen to patch up these weakness. I gave it Choice Scarf because it was very powerful and the merits of the item seemed to over ride the demerits of forgoing flexibility.

and so the team is complete!

Looking at the finished team:

I think I was able to build a well rounded team around Mandibuzz.

With Groundium Z Garchomp, Life Orb Tapu Lele, 2 UltraBeasts with BeastBoost, the team has enough power to take advantage of Tailwind as well.

*I used this team as a reference while building this team, thank you!

The center piece of this team with the move Tailwind.

Unlike most other Tailwind users, Mandibuzz has very high defenses, and its special defense is close to a Porygon2 with a Sitrus Berry.

It could often pull of a Tailwind even after taking huge damage such as LifeOrb boosted Thunderbolt from Tapu Koko out of Electric Terrain + Blizzard from Ninetails.

After setting Tailwind, it could recover up most of its health with Roost and go for another Tailwind.

The item is Sitrus Berry since Psychic seed would limit my options in a BO3.

Sitrus Berry was simply a very good item on it.

I have Foul Play as the only attacking move, but it hit some pokemon for good damage despite needing no attack EV investment.

We are launching a mail magazine service!